How To Internationalize an OS X/iOS App

To increase the user base, and thereby boost profits, all developers must localize their applications for iOS or OS X into multiple languages: users don’t buy and don’t use an application written in a language they don’t understand.

Making the app able to be localized to a specific market is called internationalization, and that's the topic of this article.

Step 1: Embed every literal string within the macro NSLocalizedString

We need to pull all of the hardcoded strings into a separate file so we can localize them. To do that, simply change all literal strings like this:

NSLocalizedString is a macro part of the Foundation Framework. It takes two parameters: the first one is the string which must be translated, written in the neutral language (typically English). The second parameter is a comment, i.e. an aid for the translator indicating the context where the string is used. That argument can actually be set to nil (as it is optional), but it is always a good idea to write short texts that help the translators.

You should do this with every string a user sees.

Step 2: Create an empty Localizable.strings for each language

Localizable.strings is the default name for the resource files that contain the localizable strings.

To create the Localizable.strings file in Xcode:

Please note that starting with Xcode 4.4 the “+” button has been moved in Project > Info > Localizations (more info here).

You should now see as many files as there are languages under the “Localizable.strings” file: 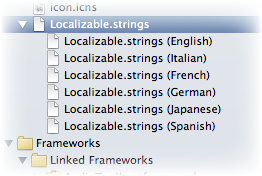 Step 3: Extract the strings to translate

Now you can use the command line tool genstrings, but we created a great app that simplifies the whole string extraction process. It's called Localizable Strings Merge and is available in the Mac App Store.

To fill the Localizable.strings files:

Now, you have to translate every Localizable.string file in the language to which it refers.

If you open a Localizable.strings file you can find many lines like:

As you can see the file consists of one or more key-value pairs along with optional comments. The key and the value is in double quotes followed by a semi-colon. The keys should be left unchanged, while values need to be translated:

That's all! Now you have a multilingual application.

One Response to How To Internationalize an OS X/iOS App

We and selected third parties use cookies or similar technologies for technical purposes and, with your consent, for other purposes as specified in the cookie policy. You can consent to the use of such technologies by using the "I agree" button. If you press the "I disagree" button you continue without accepting.

The following panel allows you to customize your consent preferences for any tracking technology used to help us achieve the features and activities of the site as specified in the cookie policy.